Hello, Robert Byrd, Is That You?… Hello?

Hello? Is that the former kleagle under that sheet? 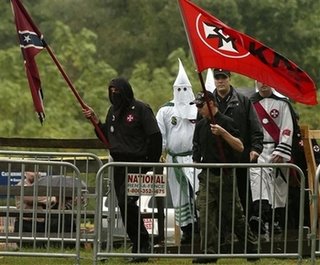 Members of the World Order of the Ku Klux Klan arrive at the Gettysburg National Military Park for a protest rally Saturday, Sept. 2, 2006 in Gettysburg, Pa. The KKK fielded 25 members for the event and their were no incidents. (AP Photo/Bradley C Bower)

About 30 klansmen held a rally at Gettysburg this weekend:

“These guys don’t stand for anything I stand for,” said Tim McCown of Jefferson, Md. “And it’s time we disengage our flag from what they stand for.”

Representatives of the national Sons of Confederate Veterans also came to protest the Klan’s efforts to identify with the Confederacy. In a nearby park, churches and other groups held a Unity Day rally.