His Beatitude the Archbishop of Athens and All Greece Christodoulos is the prelate of the Autocephalous Orthodox Church of Greece. 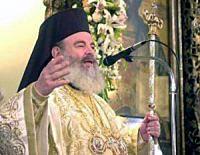 The head of the Orthodox Church of Greece Christodoulos joined the Pope in condemning Radical Islam today in Athens:

In a scathing attack, barely 48 hours after a Somali Islamic cleric called for Muslims to kill the Pope for his Tuesday utterances, Archbishop Christodoulos told a sermon in Athens that Christians in Africa were suffering at the hands of ‘fanatic Islamists’.

“Many Christians on the Black Continent (Africa) suffer from fanatic Islamists. The example of Roman Catholic monks who were slaughtered last year… because they wore the cross and believed in our crucified Lord is still recent,” said Christodoulos.

The Archbishop’s remarks come as the Muslim world is seething with anger over Pope Benedict XVI’s quoting of a 14th-century Byzantine emperor who said innovations introduced by the Prophet Mohammed (the Islamic supreme leader) were “evil and inhuman”.

The Pope has already been forced in submitting that he was “deeply sorry” after hisremarks sparked outrage in the Muslim world, with Morocco calling back its envoy and Turkey casting doubts of Benedict’s scheduled visit in November, the first to a Muslim country.

And, buried at the bottom of a ERT.GR article:

…Furthermore, Christodoulos was harsh towards Islamists, mentioning the recent assassinations of Roman Catholics by fanatical religious followers. Upon concluding, the Archbishop described his sermon as a form of wild protest, saying that the people have to demand from those holding their future in their hands to be more careful and traditional.

After Mass, Christodoulos unveiled a monument in honour of the clergymen killed between 1940 and 1949.