Adnan G. El Shukrijumah, the suspected nuclear terrorist mentioned in warning reports from Pakistan earlier in the week, is shown here in video.

Adnan is giving a presentation regarding how to jump start a car for a class in “English as a Second Language”.

Here is the video of the most wanted Al Qaeda terrorist:
(Updated with MotionBox version of video since YouTube took the video down.)

Adnan G. El Shukrijumah may have successfully smuggled nuclear material across the US border and is planning an attack on the United States.
(The above video of Adnan in class is 30 seconds long)

There is currently a $5 million dollar reward for the whereabouts of Adnan G. El Shukrijumah. 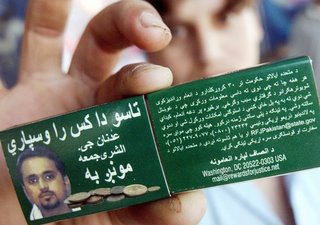 AN INCENTIVE: “You give us Adnan G. El Shukrijumah and in return we will give you rewards. We assure you that all information would be kept secret,” reads a matchbox handed out by the U.S. government, which is offering a $5-million reward.
(TARIQ MAHMOOD, AFP/Getty Images) 7-15-2005

Adnan is one of Al Qaeda’s most dangerous followers. He was a friend of Imran Mandhai back in Florida SPTImes “one of two Florida college students convicted of conspiring to bomb electrical stations, a National Guard armory, Jewish businesses and Mount Rushmore.” 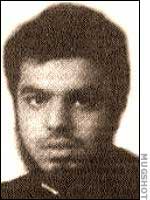 Adnan Jumaa is A Mystery Man Who Keeps the FBI Up at Night.

A screen shot of Adnan Shukrijumah from a school where he was giving a talk on how to change a battery. (WBIPI)

** A reader from Texas at Ace of Spades may have spotted Adnan earlier this year!
The Jawa Report believes the source is credible. 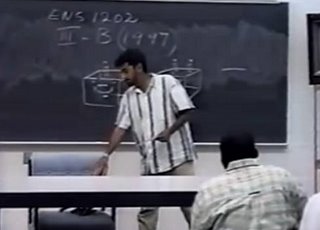 The FBI took the video clip of down for some reason from their website but, America’s Most Wanted website has a copy of the video in Windows Media Player and RealPlayer.

Lifeboat Foundation has a terrific roundup on the “Nuclear Terrorist” – Adnan Shukrijumah.

Previously:
WANTED: Adnan Jumaa for Suspected Nuclear Attack on US
Holy Texas Nuke Terrorist! Adnan Jumaa May Have Been Spotted!