Iranian media provided this possible connection… “German media reported last week that one of two suspects who is accused of planting bombs on two regional trains in Germany on July 31, was arrested by police as he was on his way to meet a Muslim leader in Odense, Denmark.” 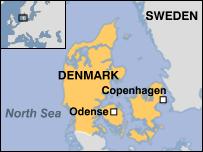 Danish police have arrested nine suspected terrorists, the country’s security intelligence service announced on Tuesday. The nine, all believed to be men under the age of 30, were detained in overnight raids on Denmark’s third largest city of Odense. All had been under surveillance “for some time,” and were detained on suspicion of planning terrorist acts.

The arrests happened in the Odense suburb of Vollsmose, Lars Findsen, head of the Danish Security Intelligence Service (Pet) was quoted as saying. He said the suspects “had acquired material … to build explosives in connection with the preparation of a terror act”.

Denmark last month charged five people under its new tougher anti-terror laws, passed in 2002. Anyone convicted of inciting acts of terrorism or advising terrorists now faces up to six years in jail.

Four Muslim youths, aged between 16 and 20, were arrested on 28 October 2005 in the Danish capital, Copenhagen. They were charged with attempting to prepare a terrorist act and helping two others to go to Bosnia the same month to collect explosives for use in “an imminent attack” on a European capital. At least one has Danish nationality and the other three grew up in Denmark.

The four men arrested in Denmark were in “close contact” with a 19-year-old Swede originally from Serbia, known as ‘Maximus’ and an 18-year-old Danish Turk arrested on 19 October in the Bosnian capital, Sarajevo on suspicion of planning a suicide bomb attack on an embassy in a European country – possiblly the British or American embassy in Sarajevo. 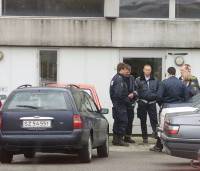 Via Ekstra Bladet– Denmark police outside of suspect’s homes in Odense.

“PET have told me that they arrested the men now because it could be difficult to discover more precisely how far the plans had progressed,” she said.

“We have uncovered evidence that suggests that some of the persons were in the process of preparing for a terrorist attack,” PET director Lars Findsen said.

Odense had reported problems in the past with Muslim youths attacking taxi drivers in the city.

Update: 7 were arraigned in court later today. Two were released. Imam, Abu Bashar, said the suspects were Muslims… No kidding!