Democratic operatives in the government again released classified information to the liberal press today in their campaign against the enemy Bush.

This time the leaks hurt the country’s efforts in Iraq and the security of America.
As the released NIE document claims:

Should jihadists leaving Iraq perceive themselves, and be perceived, to have failed, we judge fewer fighters will be inspired to carry on the fight. 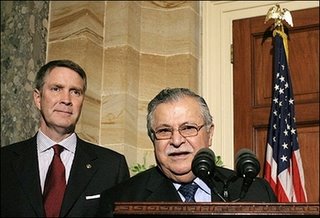 Just four days ago, Iraqi President Talabani wrote America a thank you letter describing the great progress in Iraq not covered in the mainstream media.

The first thing I would like to convey is the gratitude of all Iraqis, who are fighting for a democratic government and a civil society, to the Americans.

Without your commitment, our struggle against despotism could not have made the progress that we have achieved. No expression of thanks could be enough for those who lost loved ones in Iraq. We feel your pain, we honor your sacrifice and we will never forget you.

To those of you who have family and friends in Iraq today, we say: Your sons and daughters are helping us through a historic transition. We will always remember the enormous sacrifice that America is making for Iraq.

Thanks to the United States, we are transforming Iraq from a country that was ruled by fear, repression and dictatorship into a country that is ruled by democracy and has the values of equality, tolerance, human rights and the rule of law at its heart.

The Washington Post chose not to carry this letter by President Talbani.

However, they did publish pieces from a leaked classified document again today that paints a picture of a ungrateful and violent Iraqi population:

The State Department, meanwhile, has also conducted its own poll, something it does periodically, spokesman Sean McCormack said. The State Department poll found that two-thirds of Iraqis in Baghdad favor an immediate withdrawal of U.S. forces, according to The Washington Post. McCormack declined to discuss details of the department’s Iraq poll.

Haider Ajina sends the latest USAID Progress Report on Iraq, not carried in the media.

And, to wrap up the latest NIE democratic leak… Powerline has the video of Bush and Karzai in press conference yesterday. If you have not seen the full 8 minute clip; it is exceptional.
Hat Tip Larwyn

Flopping Aces says the MSM is spinning the results.

Democracy Project has a different take:

“In short, most Iraqis polled favor a withdrawal of US forces within a year, but most Iraqis also oppose Al Qaeda, support their central government, oppose sectarian militias, have faith in Iraqi security forces, and do not favor dissolution into Shia, Sunni and Kurd states.”