What is Democratic Congressional Candidate Tammy Duckworth afraid of that she keeps skipping her debates? 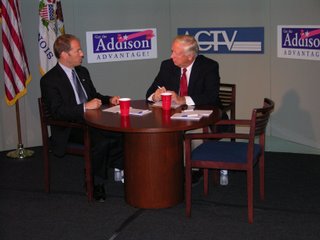 “It is clear Tammy Duckworth’s handlers refuse to let her debate me on the issues,” Roskam said. “If she is serious about debating Iraq and other issues, she would join me today at 1:00 pm.

Her political strategy of ducking debates does a disservice to voters who deserve an opportunity to interview the candidates.”

Duckworth issued a press release on August 31st challenging Roskam to debate him on Iraq. Roskam responded with a letter accepting and secured a time and location for the debate. The debate is scheduled for Wednesday, September 13th at 1:00 p.m. at the Elk Grove Township offices located at 2400 S. Arlington Heights Road, Arlington Heights. At this point, the Duckworth campaign failed to confirm her participation.