Holy Caca!
The Citgo Pro-Chavez rally was held at the same Marxist Church that held a Pro-Castro rally in August.

Citgo held the rally the day after Chavez preached that the “US Empire will soon fall.”
Not a good PR move!… In fact, a really rotten PR move!

So, does this mean that Citgo sponsors terror? 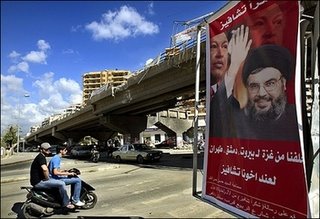 A poster showing Hassan Nasrallah(R), the Secretary General of Hezbollah and Venezuela’s President Hugo Chavez and that reads: “Gracias Chavez” is seen hanging from a destroyed bridge in a southern suburb of Beirut. Hezbollah supporters headed towards the Lebanese capital for a massive “victory” rally after the war with Israel.(AFP/Hassan Ammar)

Chavez, dressed in his signature red shirt, was introduced at the podium by activist actor Danny Glover.

At one point Chavez told the crowd, “sometimes the devil takes human form,” a comment that drew some boos — and applause — from the crowd who interpreted the reference to mean President Bush.

Chavez was visiting the church as part of ceremonies to announce the sale of discounted home heating oil to qualified low-income families.

The appearance came after reports circulated early Thursday morning that the Venezuelan president had left the country overnight after delivering an insult-riddled speech at the U.N. General Assembly on Wednesday in which he called President Bush the ‘devil.’

The crowd chanted “Chavez, Chavez, the people are with you” in Spanish as he walked into the Mount Olivet Baptist Church on Lenox Ave. in Harlem.

The event, one of a series designed to boost the Venezuelan leader’s popularity in the U.S., was organized by Citgo, a Houston-based energy company that is owned and controlled by the Venezuelan government. Under a Citgo program, and in partnership with Citizens Energy, a program started and run by former Congressman Joe Kennedy II, families from low-income neighborhoods in New York, Boston, Chicago and Philadelphia have the ability to purchase discounted home heating oil over winter months.

Venezuelan officials and Citgo employees handed out T-shirts prior to the event with the name of the program — “From The Venezuelan Heart To The U.S. Hearths” — printed across the front.

Hugo did not bolt from the US as previously reported. 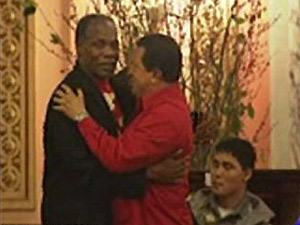 Danny Glover was there to welcome his good buddy, Hugo. (FOX)

I never paid much attention to the Boycott Citgo campaign before…
Now, I will!

Of course, the Leftists writing for Hugo are supporting a Buy-cott! Unreal.

And… instead of assisting the very poor in Antimano and Caricuao, Chavez is also going to give oil to Alaskan villagers this winter.

AllahPundit has more on the strange news events surrounding Chavez and Ahmadinejad… Democrats don’t know whether to cheer or cry.

The Anchoress absolutely nails it… Chavez is a card-carrying democrat and an Air America listener!
Hat Tip Larwyn

Mark Tapscott sees one thing Hugo got right during his rant.