While several of the democrats in Congress, but not all, may be criticizing Chavez for his attacks on President Bush, the mainstream media cannot hide their love for the Marxist dictator of Venezuela.

Today’s articles praise the generous Chavez for his Marxist “Oil for Propaganda” program he started here in the United States. 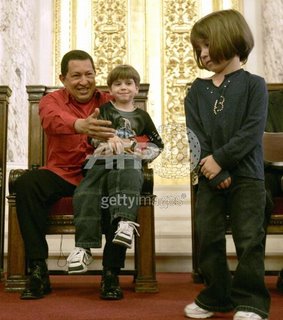 Venezuelan President Hugo Chavez holds Julian Molina, 6, as he gestures for Nailin Molina, 4, to sit on his lap while attending the CITGO-Venezuela Heating Oil Program inauguration ceremony at the Mt. Olivet Baptist Church 21 September 2006 in the Harlem locality of New York. Chavez, in Harlem to announce the expansion of a programme to send cheap Venezuelan oil to poor families in New York, launched a new personal attack against President George W. Bush, calling the US leader an “alcoholic” and a “sick man”. (AFP PHOTO)

Here are a few of the Chavez news stories from around the country today.
The LA Times:

“It makes us feel good to give,” he said to a crowd of mostly Harlem residents and Latin American immigrants waving Venezuelan flags and chanting his name.

The move more than doubles the 40 million gallons of heating oil Chavez donated to eight northeastern states last year after Hurricanes Katrina and Rita devastated refineries and caused the price of oil to soar. This winter, the program should reach about 1.2 million people in nine additional states, he said.

Chavez, speaking at the Mount Olivet Baptist Church, acknowledged that it might seem odd for a developing country to send charity to one of the world’s wealthiest nations.

“Some Venezuelans criticize me…. Some say I should be in the barrios of Caracas,” he said. “Apparently I am giving away all over the world what belongs to Venezuela.”

But the public relations value of tweaking his nemesis, President Bush? Priceless.

“We are afraid we won’t be able to heat our building this winter, and someone told me about this guy,” said Arthur Rena McDowell, a florist. “Somebody has got to make it better. It should start with our president, but it is starting with the president of Venezuela.”

By September 2005, CITGO delivered 1.9 million barrels of diesel, jet fuel and gasoline to alleviate shortages and price increases that followed Katrina and Rita.

One Philadelphian explained why she had come to New York City to hear Chavez speak by saying, “I just wanted to hear a leader of a country speak who cares about people.”

Even KTUU in Alaska:

In rural Alaska, where temperatures often hit 50 below zero, a fuel gift can be a lifesaver.

“People have to make a choice: whether they want to stay warm or buy food for the baby or the children,” said Millie Hawley, environmental coordinator for the village of Kivalina.

But this winter, many communities won’t have to make that choice, since Citgo announced plans to warm 12,000 rural Alaskan homes.

If the media really felt sorry for the poor as they pretend, maybe they would think about the 50% of Venezuelans who live below the poverty level who are watching their country’s wealth be squandered by a madman giving oil handouts to Alaskans and financial support to Islamic terrorists!