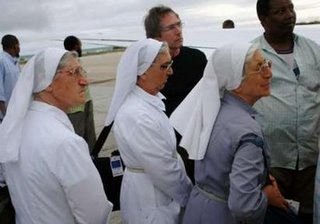 Fellow Italian nuns of slain Catholic sister Leonella Sgorbati line up to board the plane carrying her body as all the nuns working at the SOS hospital were evacuated from Mogadishu September 17, 2006. Gunmen killed the nun at a children’s hospital in Mogadishu on Sunday in an attack that drew immediate speculation of links to Muslim anger over the Pope’s recent remarks on Islam. The Catholic nun’s guard also died from pistol shots in the latest attack on foreign personnel in volatile Somalia. (REUTERS)

Two more were killed Via the AP… “The nun’s bodyguard and a Somali man who worked at the hospital also were killed by the gunmen.”

The Pope this morning said he was deeply sorry for Islam’s reaction. 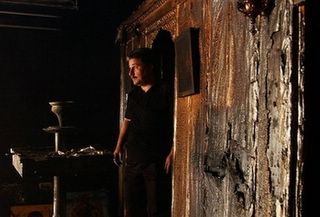 Palestinian Greek Orthodox worshipper, Samir Mitri, inspects the damage in the burnt Greek Orthodox church in the West Bank town of Tulkarem, Sunday Sept. 17 2006. The stone church built 170 years ago was torched before dawn and its entire inside was destroyed, local Christian officials said. (AP)

Two more churches were torched on Sunday in the Palestinian terriories bringing the two day total of church attacks to 7:

Earlier today in the West Bank, two churches were set alight as anger over the Pope’s comments grew throughout the Palestinian areas.

In the town of Tulkarem, a 170-year-old stone church was torched before dawn and its interior was destroyed, local Christian officials said. In the village of Tubas, a small church was attacked with firebombs and partially burned, Christians said. Neither church is Catholic, the officials said.

Palestinian Muslims hurled firebombs and opened fire at five churches in the West Bank and Gaza Strip on Saturday.

Correction: A Christian man was killed in Baghdad earlier in reponse to the Papal remarks.
Hat Tip Tommy

The Swiss Interior Minister, Pascal Couchepin, stepped forward to back the Pope’s remarks.

At Friday’s sermon in Iran (Via FOX), believers shouted, “Death to America! Death to Israel!” in response to the Pope’s remarks earlier in the week. 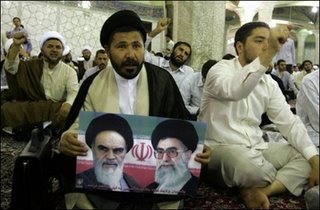