President Bush called out to the People in the Middle East and their pursuit of liberty in his General Assembly Address today to the democracies and dictatorships of the United Nations: 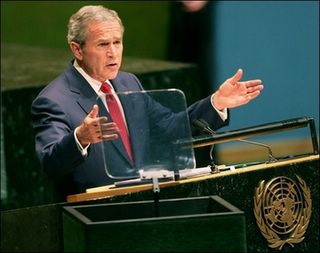 We Are Seeing A Bright Future Begin To Take Root In The Broader Middle East.

The principles animating this future can be found in the Universal Declaration of Human Rights’ statement that the “equal and inalienable rights of all members of the human family is the foundation of freedom, justice and peace in the world.” In the nearly six decades since that document was approved, we have seen the forces of freedom and moderation transform entire continents.

Some Of The Changes In The Middle East Are Happening Gradually, But These Changes Are Real. Algeria has held its first competitive presidential election, and the military remained neutral. The United Arab Emirates recently announced that half the seats in its Federal National Council will be chosen by elections. Kuwait held elections in which women were allowed to vote and run for office for the first time. Citizens have voted in municipal elections in Saudi Arabia, in parliamentary elections in Jordan and Bahrain, and in multiparty presidential elections in Yemen and Egypt.

Some Have Argued That These Democratic Changes Are Destabilizing The Middle East – (See Kofi Annan & Regional Dictators), But The Stability We Thought We Saw In The Middle East Was A Mirage.

For decades, millions of men and women in this region have been trapped in oppression and hopelessness. These conditions left a generation disillusioned and made the region a breeding ground for extremism.

Every Civilized Nation – Including Those In The Muslim World – Must Support Those In The Region Who Are Offering A More Hopeful Alternative. We must seek true stability through a free and just Middle East where the extremists are marginalized by millions of citizens in control of their own destinies.

To The People Of Iraq: We Will Not Abandon You! Nearly 12 million Iraqis braved the car bombers and assassins last December to vote in free elections, and we will not abandon you in your struggle to build a free nation. America and its Coalition partners will continue to stand with Iraq’s democratic government, help secure the international assistance and investment Iraq needs to create jobs and opportunity, and train Iraqis who have stepped forward to fight the enemies of freedom. In return, Iraq’s leaders must make the difficult choices to bring security and prosperity.

To The People Of Afghanistan: We Will Help You Defeat The Extremists Who Want To Destroy Afghanistan’s Young Democracy. Since overthrowing the Taliban, Afghanistan has chosen its leaders in free elections and built a democratic government. Today, forces from more than 40 countries – including members of the NATO Alliance – are bravely serving side by side with the people of Afghanistan against the extremists. We will help you defeat these enemies and build a free Afghanistan that will never again oppress you or be a safe haven for terrorists.

To The People Of Lebanon: We See Your Suffering, And The World Is Helping You Rebuild Your Country And Deal With The Armed Extremists Who Are Undermining Your Democracy By Acting As A State Within A State. Last year, the people of Lebanon inspired the world when they drove Syrian forces from their country and re-established democracy. Since then, they have been tested by the fighting that began with Hezbollah’s unprovoked attacks on Israel. The UN has passed a good resolution that has authorized an international force, led by France and Italy, to help restore Lebanese sovereignty over Lebanese soil. For many years, Lebanon was a model of democracy, pluralism, and openness in the region – and it will be again.

To The People Of Iran: The United States Respects You And Your Country. The greatest obstacle to a better future for Iran is that its rulers have chosen to deny the people of Iran liberty and use their nation’s resources to fund terrorists, fuel extremism, and pursue nuclear weapons. The UN has passed a clear resolution requiring that the regime in Tehran meet its international obligations. Iran must abandon its nuclear weapons ambitions. The world has no objection to Iran’s pursuit of a truly peaceful nuclear power program. We are working toward a diplomatic solution to this crisis, and we look to the day when the people of Iran can live in freedom – and America and Iran can be good friends and close partners in the cause of peace.

To The People Of Syria: Your Government Must Choose A Better Way Forward. Syria is home to a great people with a proud tradition of learning and commerce. Today, Syria’s rulers have allowed the country to become a crossroad for terrorists, and are turning the country into a tool of Iran, increasing Syria’s isolation from the world. Syria’s government can stop this growing isolation and create a more hopeful future for its country by ending its support for terror, living in peace with its neighbors, and opening the way to a better life for the Syrian people.

To The People Of Darfur: You Have Suffered Unspeakable Violence, And America Has Called These Atrocities What They Are – Genocide. For the last two years, America has joined with the international community to provide emergency food aid and support an African Union peacekeeping force. Yet the suffering continues. The Security Council has approved a resolution that would transform the African Union force into a blue-helmeted force that is larger and more robust, but the regime in Khartoum is stopping the deployment of this force. If the Sudanese government does not approve this peacekeeping force quickly, the UN must act. Today, President Bush announced he is naming former USAID Administrator Andrew Natsios as a Presidential Special Envoy to lead America’s efforts to resolve the outstanding disputes and help bring peace to Darfur.

The World Must Stand Up For Peace In The Holy Land

God Bless George Bush! There is at least one world leader who speaks out for liberty and freedom… and means it!

And, everyone knows he means it!