Despite the appeasing policies of the Zapatero government towards the Basque Separatists in Spain, the terror group said today that it will not lay down its arms until the region gains independence.
The BBC reports:

Basque separatist group Eta has said it will not relinquish weapons until the region gets independence from Spain.

Three hooded gunmen told an Eta rally in northern Spain their fight was not a thing of the past, despite a ceasefire announced six months ago.

Speaking after the statement, Spain’s prime minister said he would work towards ending 40 years of violence.

The BBC’s Danny Wood, in the Spanish capital Madrid, says this is the sixth communication by the armed separatist group since it declared a permanent ceasefire in March.

He says it could be the strongest sign yet that Eta is not prepared to give up the violent struggle for independence – or just a strategy before starting talks with the national government.

His government has indicated that it is ready to talk to Eta, but has ruled out Basque independence. 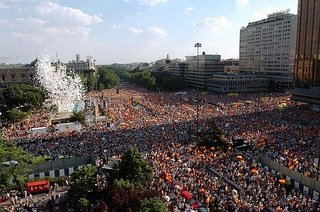 In June of this year, over a million protesters flooded the streets of Madrid to rally against the Zapatero government’s appeasing policy toward the ETA terror group as reported at Publius Pundit. Zapatero did not listen and went ahead with his plans to talk with ETA Separatist group.

The rally today ended with shots fired in the air by the terror spokesmen:

“Our blood is ready for that. We shall succeed,” the three told a crowd of around 1,000 people gathered in a forest in the Basque region in northern Spain to pay homage to slain members of the group.

They interrupted the celebrations to fire seven shots into the air.