Via Free Thoughts…
Al Qaeda is planning a large-scale terror attack on Israel and UNIFIL forces in Southern Lebanon:

According to some Western and Lebanese intelligence sources, al Qaeda has named veteran Abu Rush al-Miqati, 56, an old Middle East hand, to organize the attack. Lebanese interior minister Ahmad Fatfat reports 13 al Qaeda cells are operating in Lebanon and are being mustered for the attack.

The Italian defense minister Arturo Parisi, who visited Italian forces at Ras a Maroun in South Lebanon, reminded them that al Qaeda’s Ayman Zawahiri this week stated that UNIFIL forces in Lebanon faced attack as “enemies of Islam.”

Parisi said he was not surprised by al Qaeda’s message and warned the soldiers their mission could be “long, risky, costly and difficult.” But we are here, he said, to defend the security of Israel and strengthen Lebanon’s ability to control its territory. “We know the terrorists are not on our side.”

Italy has agreed to send up to 3,000 soldiers to Lebanon, making it the biggest contributor to the UN’s force there. Over a thousand Italians are already deployed.

All UN troops in South Lebanon are on terrorist alert.

And, despite its resistance to the Iraq War, France was also warned this week that it would be targeted by Al Qaeda. 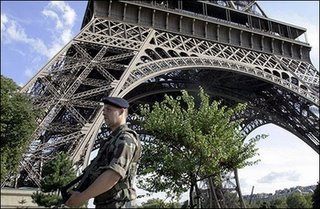 A French soldier patrols in front of the Eiffel Tower in Paris. A radical Algerian Islamist group that has singled out France as its sworn enemy officially placed itself at Al-Qaeda’s orders, vowing to support the terror network’s war on “crusaders” worldwide.(AFP/Joel Saget)

According to Al-Arabiya, al-Miqati, is no relation to the prominent Lebanese family of the same name…

It also said that al-Miqati first gained his militant experience in the ranks of Jama’a Islamiyya, an al-Qaeda linked group based in South-East Asia, as well as years of study at Koranic schools in Pakistan.

According to the unidentified expert cited by Al-Arabiya, some 13 al-Qaeda cells currently exist in Lebanon mainly centred in the northern city of Tripoli, but also the capital Beirut and other parts of the country.

Many cell members are veterans of the conflict in Iraq, but did not necessarily fight in al-Qaeda-linked groups.