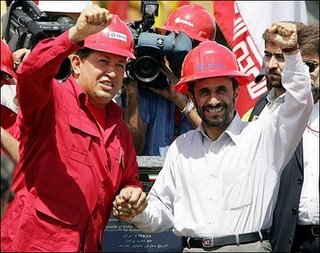 A day after Iran’s Supreme Leader Ali Khamenei urged more protests and attacks against the US, the Iranian President Mahmoud Ahmadinejad came to the Pope’s defense on Monday:

Iranian president Mahmoud Ahmadinejad reportedly defended on Monday Pope Benedict XVI over his quotation of Medieval commentary linking Islam to violence. Addressing a joint press conference with Venezuelan president Hugo Chavez in Caracas, Ahmadinejad said “we respect the pope and everyone must be interested in peace.” Speaking one day after Iran’s supreme leader Ali Khamenei accused the pontiff of being part of a “US-Zionist crusade” against Islam, Iran’s president said the pontiff’s words were taken out of context.

Ahmadinejad was leaving for New York, where he will attend with world leaders a UN General Assembly on Tuesday.

“There is no doubt that there are those who release incorrect information,” Ahmadinejad was also quoted as saying, hinting that Benedict’s words were “modified.”

Ahmadinejad will be in the US today, speaking at the United Nations after President Bush. A massive protest is planned on Wednesday against Ahmadinejad who openly calls for the destruction of Israel.