But, a militant cleric alleged to be a top leader in an al-Qaida-linked terror group was released from prison in June.

** Abu Bakar Bashir, 68, had served 26 months for conspiracy in the 2002 Bali bombings, which killed 202 people in the world’s most populous Muslim nation.

Michelle Malkin is reporting today on this sad story from Indonesia. 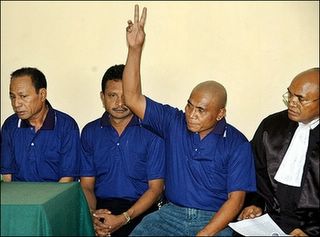 L-R: Fabianus Tibo, Dominggus da Silva, and Marinus Riwu are seen at the court in Central Sulawesi in March 2006. Indonesia will go ahead with the execution of the three Indonesian Christians on death row even though their lawyers are seeking presidential clemency for them, police said.(AFP

Do check out the YourTube video of a trial of 3 Christian women in Indonesia last year HERE.

Do you suppose the Radical Islamic mob had any influence on the outcome of the trial of these 3 Christian ladies in 2005?

* HERE * is a link to where you can donate to Jubilee Campaign for the good work they are doing for persecuted Christians and other religious minorities worldwide. (They captured the video.)