Muslims were upset that the Christian woman would not be stoned to death for her comments against Muhammad and that is when they torched the local churches. 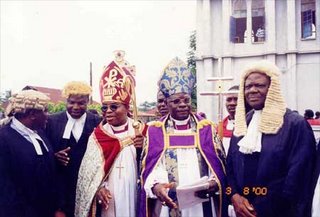 An Anglican service in Nigeria.

Christian Today is blaming the extremist violence on reaction to the Pope’s remarks.

On 19th September in the city of Dutse, in the northern Nigerian state of Jigawa, a mob of Muslim youths set upon the Christian minority in the city. St. Peter’s Anglican Cathedral was burnt to the ground and the Bishop’s office destroyed. Initial reports speak of between 4 and 10 other churches as well as shops, vehicles and homes belonging to Christians having been set ablaze. There are believed to be 15 churches locally, so 10 would amount to two-thirds of all the churches in the area. Several people were injured. According to some reports the state governor was himself attacked when he tried to calm the mob and was hurriedly taken away from the area. The mob was only quelled when hundreds of heavily armed police belatedly began to patrol the city.

Speaking at a joint press conference in Kaduna, yesterday, Jigawa State, CAN Secretary, Reverend Ibrahim Dangana, alleged that instead of dissuading Muslim fanatics that perpetrated the destructions, the Emir and Sardauna looked the other way.

Dangana said, “the Emir of Dutse was present with the Commissioner of police when Churches, Christian shops, clinics and houses located at Gidan John were looted and set ablaze.

“An inspector of police threw tear gas to scare the mob from burning and looting shops and other Christians’ properties, but the Emir slapped him twice. Immediately Sardauna took him to the Emir’s place and forced him to do Sallah, which is against his fundamental human right.”

Narrating the cause of the crisis, Dangana said “a business transaction between a fashion designer, one Jumai and her customer, one Binta went awry, and in the course of that, they rained invectives on their deities. While Jumai accused Prophet Mohammed of engaging in adultery by marrying many wives, Binto accused Jesus Christ of being a drunkard by turning water into wine.”

You can donate to the victims of this violence HERE.