The Egyptian terror organization Jamaa al-Islamiya will probably not have a difficult time transitioning into the Al Qaeda network. 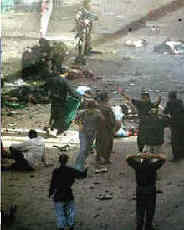 It wasn’t that long ago that the Egyptian terror group that al Zawahiri helped organize hacked 58 tourists to death at the temple of Hatshepsut in Luxor .

The announcement today that al-Jamaa al-Islamiya would join with Al Qaeda brings Al Zawahiri back together with his old brutal terror friends from Egypt. Obviously, after a brief hiatus, they are back to their old ways:

Ayman al-Zawahri’s recent calls to arms could embarrass those who once fought alongside him back home, especially when they are trying to give up their legacy of armed opposition.

For years a security nightmare before its leaders renounced violence in 1997, Egypt’s al-Jamaa al-Islamiya is desperately trying to reassure the state of its new ‘reformed’ line.

The al-Jamaa’s 51-year-old leader Karam Zuhdi – who has been in prison since 1981 over his role in the assassination of President Anwar al-Sadat the same year – caused a stir last July with a frank confession to the Arabic newspaper Asharq Al-Awsat.

Asked what he would have done if he could turn back the clock, Zuhdi replied: “I would have intervened to prevent his murder … Sadat, may God bless his soul with mercy, is a martyr along with everyone who died in that fight.”

This new direction may not be much of a stretch for Al Jamaa, it wasn’t that long ago that they hacked to death 58 foreign tourists in 1997:

Jamaa al-Islamiya was founded in the 1970s when the Muslim Brotherhood’s leadership decided to renounce violence, and was originally an umbrella organisation for militant university student groups.

It subsequently moved from university campuses to poor and deprived neighbourhoods of Egyptian cities and its leaders became younger and less educated. Al-Qaeda’s number two Ayman al-Zawahiri was also among the founders of Jamaa al-Islamiya in the 1970s.

In the 1990s, the organisation carried out an extended campaign of violence, from murders and attempted murders of prominent writers and intellectuals, to the repeated targeting of tourists and foreigners. Jamaa al-Islamiya’s record of terror includes the 1997 attack at the temple of Hatshepsut in Luxor – northern Egypt -, in which a band of six men machine-gunned and hacked to death with knives 58 foreign tourists and four Egyptians.

The leader of Jamaa al-Islamiya is serving time in the US:

Sheik Omar Abdul Rahman, who is serving a life sentence in a federal prison in the United States for masterminding the 1993 bombing of the World Trade Center in New York.

There were accusations that Osama Bin Laden was behind the attack in Luxor in 1997:

Of course, there were Arab publications who blamed the Israelis for this terrible slaughter at Luxor. 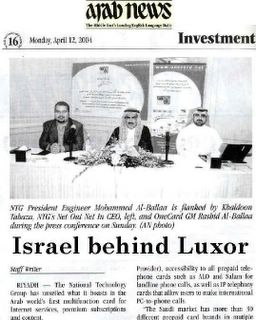 Just like with 9-11, there were insane conspiracy theories surrounding the Luxor massacre back in 1997, even though the Egyptian terror group Jamaa al-Islamiya took credit for the attacks soon afterwards.