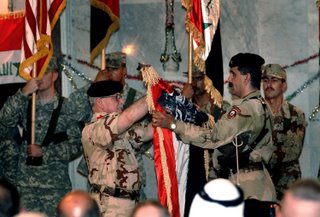 A tranfer of security ceremony in Iraq on Tuesday August 8, 2006. The Iraqis are now responsible for security spanning three of Iraq’s northern provinces. (MNF IRaq)

Today, in another sign of progress toward a stable and secure Iraq, the Fourth Iraqi Army Division Headquarters officially assumed the lead in its area of responsibility from the 101st Airborne Division. This achievement represents the Division halfway mark of our joint goal of putting all Iraqi Security Forces in the lead in coordinating, planning and conducting security operations in Iraq. We congratulate the Iraqi people and the Government on Iraq on this important milestone.

Five of the Iraqi Army’s ten division headquarters, 25 brigade headquarters, and 85 battalions in the Iraqi Army now have the lead for security responsibilities in their areas. Additionally, to date 48 of 110 Coalition Forward Operating Bases have been transferred to Iraqi control.

These turnovers from Coalition forces to Iraqi security forces reflect the increased operational capacity of the Iraqi security forces. Although these forces are increasingly capable of planning and conducting security operations independent of the Multinational Forces, we pledge our continued support to them and the Iraqi Government as they seek to provide peace and prosperity for all of Iraq’s peoples.

May God bless the people of Iraq.

The transfer on Tuesday marked the halfway point of Iraqi divisions taking over responsibility for security operations:

The Iraqi army took an important step forward Tuesday by marking the halfway point for division headquarters to take the lead for security operations throughout the country.

Its area of responsibility includes the cities of Tikrit, Kirkuk, Bayji and Samarra, as well as the major oil and electrical infrastructure in northern Iraq.

The 4th IA Division is the fifth of 10 Iraqi Army divisions to take control over Iraqi units in their assigned regions. In addition, there have been 25 brigades and 85 battalions assuming operational command and control to date.

“Today is a day of dignity for us Iraqis who are loyal to the motherland,” said Lt. Gen. Abdul-Aziz Abdel-Rahman al-Mufti, commander of the 4th Iraqi Army Division. “We will not stop or look back,” he said.

Please remember that this took place with minimum casualties and in only three years time.

Haider Ajina also noticed this news today and says it is making headlines in Iraq.

And, via Real Clear Politics, One General is fed up with the MSM.
Hat Tip Terry Harris

And, an NBC War Correspandent advises against trusting American media!