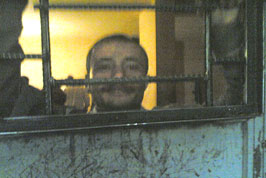 Via Terry Glavin, an image of Mohammed Al-Asadi peering from his jail cell in Yemen.

Also, after his arrest… The Yemen Observer license has been revoked, and hard copies of the newspaper are banned. Private prosecutors have made a series of extreme and irrational demands, from calling for the editor Mohammed Al-Asadi to be executed, to be prevented from ever practicing journalism again. Its electronic version is still online.

The last that was written here about Mohammed Al-Asadi, the Editor-in-Chief of the Yemen Observer, he was facing an Al Qaeda-linked prosecution team in Yemen asking for the death penalty against Al-Asadi for publishing the Danish Muhammad Cartoons. Sugiero had this:

Up to 21 prosecution lawyers called for the death penalty for Mohammed Al-Asadi, the Editor-in-Chief of the Yemen Observer, and the permanent closure of the newspaper, during Al-Asadi’s trial on Wednesday.The lawyers, commissioned by Sheik Abdul-Majid Zindani, the Chairman of Islah Shura Council and led by Mohammed Al-Shawish, also called for the confiscation of all the newspaper’s property and assets, and for financial compensation to be paid to be the Muslim’s ‘Finance House’, which last existed during the time of the Caliphs, 1200 years ago.

They recounted a story in which a lady was killed during the Prophet’s lifetime after she insulted him, and that the Prophet then praised the killer. They said that they wanted the same punishment to be applied on “those who abuse the Prophet”

Mohammed Al-Asadi sits in a jail cell in Yemen for publishing “two thumbnail images of the Danish cartoons, obscured by a thick black cross.” 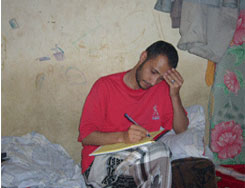 The Yemen Observer that Al-Asadi worked for has reported that it had lost its license :

The Yemen Observer license has been revoked, and hard copies of the newspaper are banned. Private prosecutors have made a series of extreme and irrational demands, from calling for the editor Mohammed Al-Asadi to be executed, to be prevented from ever practicing journalism again. They have demanded the newspaper be closed permanently, and its assets seized.

For what? For articles which clearly defended Islam and condemned the cartoons first printed in Denmark insulting Prophet Mohammed (PBUH). The editor was jailed for calling upon Muslims to be tolerant, for apologies to be accepted, for people to move on. For that, it has been attacked, victimized, and shut down.

The trial drags on, but the continued closure of the newspaper is starving it of the crucial income it needs to operate and pay its staff. Without a license to operate, the newspaper faces a bleak future.

The Observer journalists continue to write and produce news on this website: www.yobserver.com. But it is not clear until when they will be able to continue.

We value our readers greatly. At this difficult time for the newspaper, we appreciate your support all the more. We can be reach at this email: [email protected]

On April 19, 2006, Armies of Liberation had this:
“The trial of Mohammed Al-Asadi, Editor-in-Chief of the Yemen Observer, was adjourned on Wednesday for two weeks because the prosecution team had failed to adequately prepare for the trial. Judge Mohammed Sahl adjourned the hearing in the General South-East Court in Sana’a until May 3.”

On May 4, 2006 the European Tribune reported this:
“In another convoluted twist, the trial of Mohammed Al-Asadi, the Yemen Observer’s editor, was again postponed yesterday until May 24th, the 5th time the trial has been postponed.”

On May 24, 2006 came this news:
“The trial of Mohammed Al-Asadi, editor-in-chief of the Yemen Observer, has been adjourned for three weeks until June 14. The newspaper printed two thumbnail images of the Danish cartoons, obscured by a thick black cross.”

Suddenly, the story of Mohammed Al-Asadi grows cold. There is no news of his trial in June. No news of another postponement.

Reporters Without Borders does not have information posted about Al-Asadi.

Yemen maintains an embassy in the United States (Via Freedom’s Zone). Maybe they would know what happened to the Yemeni journalist now jailed 6 months.

Hopefully, the world will not forget about this journalist jailed in Yemen.