“Passengers are no longer allowed to bring Liquids on Planes.”

Nutroots crowd call it a “PR attempt to prop up the chimp’s numbers!” (see below) 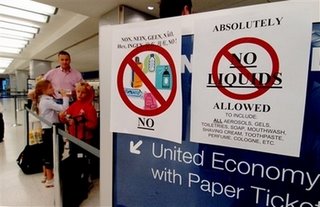 New restrictions, prohibiting any liquids in carry-on luggage, are posted at a United Airlines check-in line at JFK Airport, Thursday, Aug. 10, 2006 in New York. U.S. air travelers poured out liquids, opened their bags for inspection and endured long waits Thursday as airports heightened security and some flights were canceled or delayed after the discovery of a terror plot aimed at airlines traveling from Britain to the United States. (AP Photo/Henny Ray Abrams)

The BBC reported on the story this morning:

A plot to blow up planes in flight from the UK to the US and commit “mass murder on an unimaginable scale” has been disrupted, Scotland Yard has said.
It is thought the plan was to detonate explosive devices smuggled in hand luggage on to as many as 10 aircraft.

Police are searching premises after 21 people were arrested. Home Secretary John Reid said they believed the “main players” were accounted for.

High security is causing delays at all UK airports.

The threat level to the UK has been raised by MI5 to critical after the arrests in London, High Wycombe and Birmingham.

BizzyBlog has much more.

There is chaos at British airports after police disrupted a plot to cause “mass murder on an unimaginable scale” by blowing up transatlantic airliners.
The explosives would have been smuggled aboard at least six airliners as hand luggage – and could have been missed during x-ray screening.

Speaking at Scotland Yard, Deputy Commissioner Paul Stephenson said he was confident the police had disrupted a plot “to cause mass murder on an unimaginable scale”.
He said 21 people arrested in London, Birmingham and the Thames Valley were still being held – the culmination of a covert counter-terrorist operation lasting several months.

Tom Blumer says “It must be big — The Beeb used the T-word!”

In view of today’s news from Britain about the latest terrorist plot to blow up commercial airliners, today’s Examiner editorial on the missing 11 Egyptians is especially relevant.

Pajamas Media has a terrific roundup on the story.
Michelle Malkin has a very impressive posting on the planned attacks.

Here are a few comments from the Nutroots crowd at Democratic Underground:

Yeah…it’s sad, but my first reaction is “it’s a sham”

I mean…they could have legitimate concerns for my wife’s legitimate safety (she’s taking off out of Hartsfield-Jackson literally as we speak), but my gut reaction is that it’s all a PR attempt to prop up the chimp’s numbers

It won’t be the war criminal Tony Blair that will get his ass blown up.

It will be innocent people that are being put at risk by the folly of the Blair government.

Most recent polls found public trusts Dems more than Repukes on homeland security. Think maybe Tony and his master are in trouble? Voila! A plot!

This one needs serious help- flyarm:

all the carry ons..add weight to a flight ..more weight.. more fuel consumed..

now with BP oil shut down..could Blair being holding back fuel for the british airlines..and US carriers..in preperation for a air strike on Iran?

i believe Blair shut down the oil fields of BP to reserve oil..in case of a oil shortage in the event of air strikes on Iran!

think about it..its a self imposed reserve of oil…

I believe this emergency is in response to the Lamont victory and the upcoming elections. Bush cries wolf again…

It’s more to do with Blair trying to use the same tactics the neocons use on America: keep the populace in a permanent state of fear to drown out any critical thinking.

Obviously… Tony Blair’s ass is on fire for being America’s dogtail – as they like to call it in the UK. Stories like this are sponsored by his government and are planned way ahead and are designed for times like this to distract people from what’s really going on and to try and cover his ass.

My comment: Let’s all pray that those arrested terrorists are treated with utmost love, respect and care. We wouldn’t want the little darlings to be upset.