It’s really not that big of a surprise that you did not hear this news since even NBC reporters warn against the biased media reports coming from Iraq.
But…

The 4th Iraqi Army Division, which took control at a ceremony yesterday at a base in Tikrit, is the fifth of 10 Iraqi divisions to assume security responsibility in their country. (Bloomberg– MNF-Iraq) 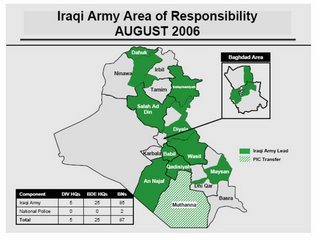 The territory that was handed over today to Iraqi forces extends from the foothills of Iraq’s eastern mountains all the way west to the Syrian border. (Bloomberg) 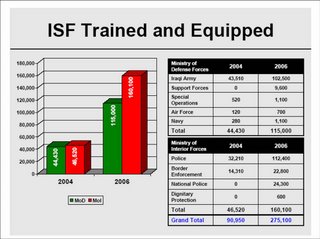 Following up on the good security news from earlier today, here is the very good news story from Iraq as posted at Lawk Salih where Westerners walk freely down the streets and no US troops have been killed:

Did you know there is a vast region of Iraq where no U.S. troops have been killed, enemy terrorist activity has been negligible, there are few U.S. troops deployed, it is safe for Westerners to walk the streets, new business investment is taking off and there is a stable, democratic government providing more than adequately for the regions security? The good — no, make that outstanding — news from Kurdistan is that life in the northern Iraqi region is well on the way to normalcy. It’s not your fault for not knowing. The relentlessly negative Western media have not told the Kurds’ story.

This is the same region whose people Saddam Hussein tried to wipe off the face of the Earth. His regime murdered some 200,000 Kurds with new-fangled chemical weapons and old-fashioned thuggery. After the first Gulf War and the debacle in which the first President Bush failed to provide protection against Saddam’s helicopter squadrons, the Kurds recovered and began to rebuild their society under cover of a U.S. and Coalition-enforced “no-fly zone.” But fear of Saddam’s regime still was a powerful dampening force.

When the U.S. invasion of Iraq came in 2003, Kurds joined with U.S. forces to topple Saddam. Today they tightly control their own regional border, mostly keeping out foreign terrorists who can more easily penetrate Iraq’s larger border and make their way to Baghdad to wreak havoc.

The rebuilding process in Kurdistan is going so well that some of the region’s leaders now are engaged in an economic development and “thank-you” tour of the United States.

This is quite a different picture than the one painted by the mainstream media and Michael Moore in his warning to democratic hawks about a ” senseless, immoral, unwinnable war.”

The Anchoress says that “Iraq keeps chugging along.”