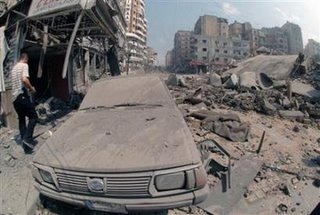 Anyway – my question is if the NY Times is also manipulating pictures – the subject in question is what has been called the “Lebanese Pieta”. Using Adnan Hajj as “reliable source” (and to prove I am not using “my own sources”) have a look at these few pictures…
The question around manipulation is “Where’s the dust?”

If you break concrete, heck even if you cut a little drywall, there is dust everywhere (look at 911 survivors)…
This picture has dust everywhere… (using Adnan Hajj as source in above photo)

This picture mysteriously has none – now tell me how does a huge bomb make no dust? 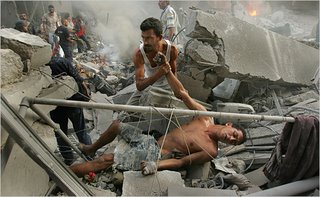 * Not only that but what is that little man going to do with this “body”?
* Is he going to carry him out of there in a fireman’s carry?
* Why is he the only one at the scene?

This photo raises loads of questions.

Update: Here is another look at the photo with its caption from “Turmoil in the Mideast” (July 27, 2006)… 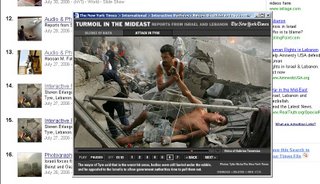 Caption: The mayor of Tyre said that in the worst hit areas, bodies were still buried under the rubble, and he appealed to the Israelis to allow government authorities time to pull them out. (Photo Tyler Hicks The New York Times)

There is an updated posting HERE.