Taking the BBC’s online “7 days 7 questions” news quiz, I discovered that President Bush had apparently read “L’Etranger” on holiday this year. It’s no easy task to distil these grand and difficult themes into a small text box for a light-hearted news quiz. The BBC have chosen to summarise it thus: 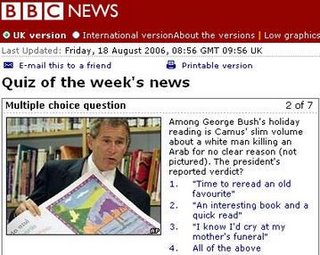 Among George Bush’s holiday reading is Camus’ slim volume about “a white man killing an Arab for no clear reason.” (not pictured). The president’s reported verdict?

1.) Time to reread an old favourite.

2.) An interesting book and a quick read.

So, Bush is reading about killing an Arab for no clear reason? (not pictured?)

And, of course the BBC digs up the infamous goat book for the picture.