Winning the hearts and minds of the Iraqis, terrorists again targeted a soccer match with their bombs, killing at least 10 in Al-Hadhar on Friday. 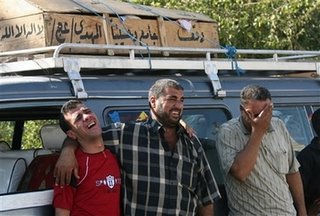 Iraqis mourn below the coffin for a boy killed in the previous day’s bomb attacks on a soccer field, Thursday, Aug. 3, 2006, in Baghdad, Iraq. The two homemade bombs went off Wednesday afternoon on the soccer field in the mostly Shiite district of Amil in west Baghdad, killing both players and spectators ranging in age from 15 to 25, police 1st Lt. Maitham Abdul Razzaq said. (AP Photo/Khalid Mohammed)

For the third time in three days, terrorists attacked another soccer game in Iraq:

The officer, speaking on condition of anonymity, said that nine more police and three more civilians were wounded in the blast in the town of Al-Hadhar in Nineveh Province, 250 kilometres (160 miles) north of Baghdad.

“He drove into the police guarding the entrance to the pitch, and blew up” the officer said Friday.

The Al-Hadhar attack followed a morning of intense clashes further north in the Nineveh provincial capital, Mosul, in which nine police officers were killed in a series of bomb and mortar attacks around the city.

At least 14 children were murdered Wednesday in Baghdad while playing soccer at two different fields where terrorists had buried bombs in the pitch hoping to kill the children who would be playing ball there.

Mohammed has thoughts on how the Arab media is handling this news.