Yesterday, Allen Roth and David Goder from One Jerusalem held a teleconference call with bloggers from Europe, the US, and Israel with General Moshe “Boogie” Yaalon. 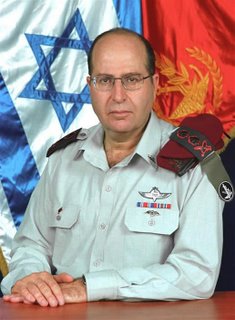 One Jerusalem lists out the powerful points made by General Yaalon.

General Moshe “Boogie” Yaalon served from 2002-2005 as chief of staff of Israel’s Defense Forces. He served in several elite positions in the IDF during his career: including commanding officer for intelligence.

General Yaalon presented some of his observations about the Lebanese War, the threat of Iran, and the current situation in Israel.

One Jerusalem also posted the audio from the call this morning.
It was another great conference call put together by the “One Jerusalem” folks.