A suicide bomber killed 21 people in a crowded Afghanistan market including children. 13 others were wounded. The attacker was targeting civilians because there were no army checkpoints in the area.

Don’t expect any massive protests over this slaughter. 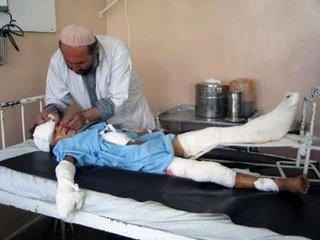 Afghan doctor checks a boy wounded by a suicide car bomb in the southern province of Kandahar August 3, 2006. (REUTERS/Ismail Sameem)

Don’t worry, unlike the Qana killings, this story will soon be forgotten. 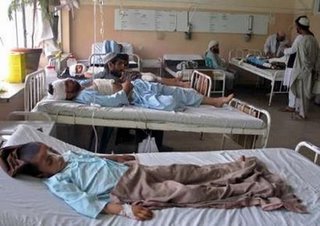 Wounded Afghans lay at a hospital beds after a suicide car bomb attack in the southern province of Kandahar August 3, 2006. (REUTERS/Ismail Sameem)

The attack on Thursday was almost as barbaric as the slaughter yesterday in Baghdad where terrorists buried bombs in a playground murdering 14 children who were playing soccer there.

And, The Real Ugly American sheds more light on the misreporting of the Qana massacre.
Previously:
Terrorists Bury Bombs on Soccer Field, Kill 14 Children In Baghdad