The Christians said they were holding a “Peace Conference” in Kabul but after major protests by regional clerics the Korean Christians decided to leave.

Dozens of Afghan Muslims have converted to Christianity in recent years and live underground, according to locals. 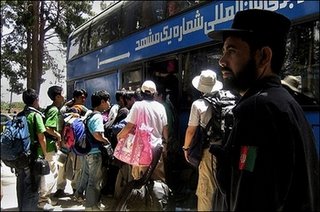 Around 1,500 South Koreans arrived this week for a “peace festival”, and education and entertainment programme.

On Wednesday, hundreds of Afghans held a protest rally against them at a mosque in the city of Mazar-e-Sharif.

“They were given tourist visas and now it seems they are misusing their tourist visas,” a government official told the AFP news agency.

“The risk of them becoming a target is very high,” he said.

Correspondents say that the Seoul government has repeatedly urged the Christians – among them 600 children – to return home, warning of the dangers they face at the hands of the radical Taleban movement.

A spokesman for the South Korean-based Institute of Asian Culture and Development (IACD) told AFP that they are only in the country to provide war-ravaged Afghanistan with medical, education and cultural programmes.

He said they were in the capital and four other towns and cities.

“We are not against the policies of Afghanistan. We respect and we love Afghanistan,” he said.

Sadly, their generosity was not appreciated.