First-Sergeant Uri Grossman was killed by a Hezbollah anti-tank missile. 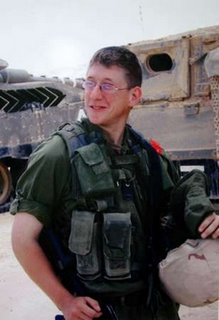 An undated handout picture of First-Sergeant Uri Grossman released August 13, 2006 by the Israeli Defense Forces. The soldier-son of Israeli author David Grossman has been killed in fighting in Lebanon, the army said on Sunday, just days after the internationally acclaimed writer publicly urged the government to cease fire. Uri Grossman, 20, was killed late on Saturday by an anti-tank missile Hizbollah guerrillas fired at his tank, an army spokesman said. (REUTERS)

The soldier son of an Israeli peace activist was killed in fighting in Lebanon today:

The son of left wing author David Grossman was killed in action in southern Lebanon on Saturday. The soldier, Sergeant First Class, Uri Grossman, is from Mevasseret Zion, outside Jerusalem. Grossman was killed when his tank was hit by a missile in the south Lebanese village of Khirbet Kasif.

On Thursday, three of Israel’s most successful left-wing authors and intellectuals – Amos Oz, David Grossman and A.B. Yehoshua – joined together to urge Prime Minister Ehud Olmert to respond positively to an initiative by Lebanese Prime Minister Fuad Saniora, offering to deploy the Lebanese army to southern Lebanon, aided by an international force, and an exchange of prisoners.

Israel agreed to the UN ceasefire. Lebanon and Hezbollah leader, Nasrallah, did not.