That would include most of the New Democrats with the exception, of course, of Joe Lieberman. 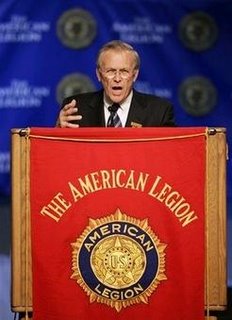 Donald Rumsfeld lashed out at Bush critics today in a speech at the American Legion’s national convention:

Rumsfeld portrayed the administration’s critics as suffering from “moral and intellectual confusion” about what threatens the nation’s security.

In remarks prepared for delivery to the American Legion’s national convention, Rumsfeld recited what he called the lessons of history, including the failed efforts to appease the Adolf Hitler regime in the 1930s.

“I recount this history because once again we face the same kind of challenges in efforts to confront the rising threat of a new type of fascism” he said.

Rumsfeld spoke to an American Legion convention as part of a coordinated White House strategy, in advance of the fifth anniversary of the September 11, 2001, terrorist attacks on U.S. soil, aiming to take the offensive against administration critics at a time of doubt about the future of Iraq and how long U.S. troops must remain there.

Rumsfeld recalled a string of recent terrorist attacks, from the 9/11 attacks to bombings in Bali, London and Madrid, and said it should be obvious to anyone that terrorists must be confronted, not appeased.

He said, for example, that more media attention was given to U.S. soldiers’ abuse of Iraqi prisoners at Abu Ghraib than to the fact that Sgt. 1st Class Paul Ray Smith received the Medal of Honor. 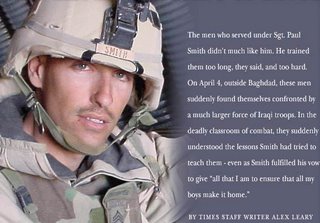 I think Rumsfeld was talking about this in his speech today.