As Pluto suffers, others make light of his demise… Pathetic!

Sadly, it was only a matter of time… 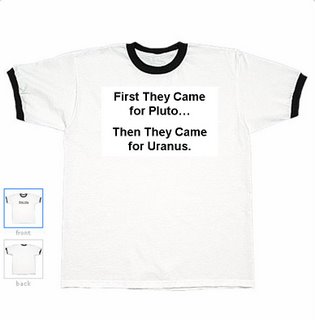 The sad news this week of the banishment of Pluto from the Solar System was not well recieved in all circles, or orbits. Now, Pluto devotees are fighting back:

Under new guidelines, Pluto was downgraded to a “dwarf planet,” a new category that also includes the asteroid Ceres, the newly discovered object 2003 UB313, and possibly dozens of others.

On Cafepress.com, a San Francisco-area Internet company that prints T-shirts and other merchandise, an explosion of Pluto inventory popped up within 24 hours of the news. By Friday morning, the site featured 200 designs on more than 1,500 products. 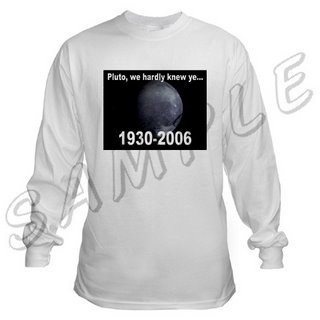 Cafe Express has some great Conservative Gear, too.
As does MetroSpy.

In related news…
The email circling the internet about Mars spectacularly close to Earth tonight- Is bogus.
However, Oregon Live reports- “Low in the eastern sky tonight, Venus and Saturn will be less than 1 degree apart. Venus is the brighter and lower of the two planets — use binoculars to get a better look.”

And… The New Editor has the ironic story of the world’s first female space tourist.