Video of the SUV rampage in San Francisco at KRON HERE 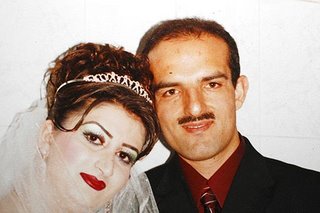 Omeed Aziz Popal– The family is saying that the arranged wedding in Afghanistan last monthmay have stressed him.

What happens at these Pakistani/Afghani “weddings” that makes people come back and kill?

Three people living in the residence (a Cabrillo Drive house) were taken down to Fremont police headquarters for questioning. (KRON) 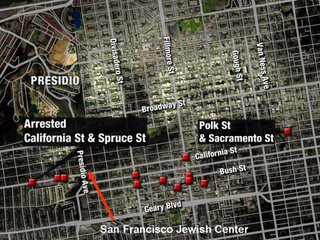 The San Francisco Jewish Center is located at the corner of Presidio and California Street (3200 California Street). The map also shows the route of Omeed Aziz Popal’s rampage from this afternoon.

One person was killed and at least 14 others injured when a rampaging man intentionally targeted pedestrians with his sport utility vehicle in San Francisco and Fremont on Tuesday afternoon, according to police.

The driver, a man from Fremont, was in San Francisco police custody. His name was not immediately released by police, but California Department of Motor Vehicles records show the license plate on the black Honda Pilot SUV is registered to Omeed A. Popal of Fremont.

An aide to San Francisco Mayor Gavin Newsom, who spoke on condition of anonymity because the matter was under investigation, told the Associated Press that Popal was the suspect in custody.

The spree apparently began around noon in the East Bay, where Fremont Police Sgt. Chris Mazzone said the driver struck and killed a 55-year old man walking along the side of the road on Fremont Blvd. near Ferry Lane.

Witnesses said the driver, Omeed A. Popal, did not slow down during his rampage:

The spree began around noon when an unidentified man walking along the side of the road was hit by a black Honda SUV. He was thrown into a field and pronounced dead at the scene, Sgt. Chris Mazzone said.

Witnesses said the driver did not slow down.

He then crossed the bay into San Francisco, where he injured at least 13 people during a 20-minute hit-and-run spree, police said.

It looks like Omeed Aziz Popal had a traffic violation in 2005. 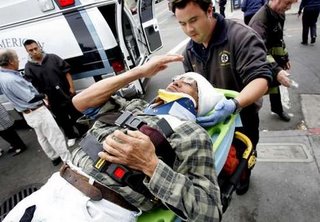 An injured man he was hit by a car while crossing a street in San Francisco. (AP)

Popal’s family had this to say about their kind-hearted but troubled family member:

A woman who identified herself as his cousin said he was having recurring nightmares about someone coming to kill him and had been taking medication.

“He thought the devil was coming to him,” said Zargona Ramish, who went to the family’s home Tuesday afternoon while Popal’s relatives were speaking with police. “He is a very good person. He is not like that. What’s wrong with him?”

Where have we heard that before?

A bike rider was also a victim of the violence. (CBS13)

Zombie says that Popal just returned from Afghanistan less than a month ago. He just “got married” there.

Via lisan at LGF… “He may have been stressed from his wedding.”
This account says his wife is still in Afghanistan unlike a previous account.

The black SUV looks banged up after the rampage this afternoon. 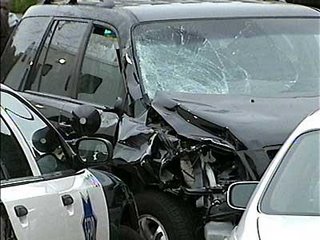 The driver was injured and in stable condition, said an aide to San Francisco Mayor Gavin Newsom who spoke on condition of anonymity because the matter was being investigated. (KTVU)

Michelle Malkin has more on the Jewish Center connection.
Hugh Hewitt has several updates on the story tonight.
The Anchoress says, “This is becoming an appalling habit in the press and by politicians.”

Pajamas Media has a large roundup.

Update: From the San Francisco Chronicle:

Those involved in the investigation — speaking on condition of anonymity — discount any mental illness, saying the 29-year-old Afghanistan native seemed coherent, unrepentant and claimed that he repeatedly drove at pedestrians because he “just wanted to.