From the O’Reilly Factor…

Well, this is about as low as it gets!

Now, the Boston Globe is twisting the words of a wounded soldier who lost both legs in Iraq to fit their liberal agenda… SICK!
FOX VIDEO HERE

The Boston Globe slanders a double amputee from Iraq. 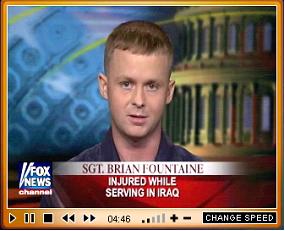 Sgt. Brian Fountaine: To be honest, if I knew that they were a liberal newspaper in the fist place, I wouldn’t even had talked to them. But, I told him what I thought and I think he just spun it way out of control and he put it to his newspaper’s point of view which I did not know was antiwar.

Bill O’Reilly: Alright, give me a specific about what you told them and how it played out.

Sgt. Brian Fountaine: I’m not sure about specifics but something off the top of my head, even the headline. It made it sound like I’m against the war and I’m against everything that’s going on over there, which isn’t true! 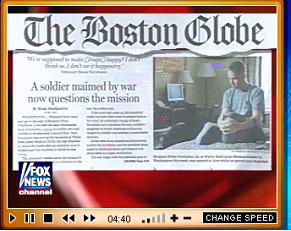 Here is the article by the Boston Globe.
Reproduced here on the far left website Common Dreams.

Here is part of the Globe’s twisted report:

If the topic had come up, the president might not have liked what Fountaine had on his mind. In a dramatic change of heart, Fountaine now considers the war a military quagmire in which American soldiers are caught in a deadly vise between irreconcilable enemies.

In his view, troop morale has plummeted, suicide has increased, and the sacrifices being made in American blood and treasure suddenly seem questionable.

Anything to fit the Far Left agenda! That is really disgusting!

Here’s the rest of the story…
The Boston Fire Department is offering a job to the young war hero.
(There are a couple of crazy comments at the link above, by the way.)

In other “newspaper news”… The Washington Post quotes CAIR in their report on Charles Johnson and Reutergate.

And,… Jules Crittenden has a good piece on Media Bias in Lebonon in the Boston Herald today.