“New Jersey residents must be able to count on the fact that officials who make decisions on state contracts won’t be subject to influence by vendors who offer generous freebies.” 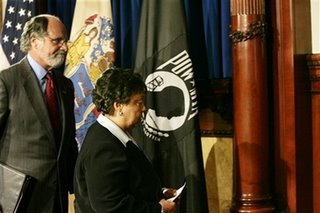 The Democratic Attorney General of New Jersey became the first AG in modern times to resign in scandal:

Zulima Farber became the first New Jersey attorney general in modern history to resign in scandal, announcing her decision yesterday after a special prosecutor determined she violated state ethics rules by aiding her boyfriend at a traffic stop earlier this year.

Gov. Jon Corzine, who pledged a “zero tolerance policy” for ethics infractions in his administration, stood side by side with Farber as they made the announcement at a somber news conference in the governor’s Statehouse office last night. Just seven months earlier, the pair stood in the same room as Corzine tapped Farber as the first Hispanic to serve as New Jersey’s chief law enforcement official.

Update: And here is a doozy from Governor “I played in the Big Leages (see bleow)” Richardson and his Walmart activism.

Previous Democratic Corruption Convictions and Scandal (from the past year and a half):

Illinois- Mayor Arrested for bribery charges
Not That You Would Know, But Today’s Arrested Mayor Is Democrat

Louisiana- Former Aide Convicted, Representative Under Investigation
Former Aide Pleads Guilty, Will Testify Against Rep. Jefferson
Six aides were served subpoenas to testify in the bribery case against Re. Jefferson

New Mexico- Democratic Governor Lied on His Resume
Governor Richardson admits after nearly four decades that he was not drafted by a major league baseball team as he had claimed.