Newsbusters has this stunning blurb of NBC’s Brian WIlliams comparing Army Rangers and Navy Seals and the Special Forces to Islamic terrorists! 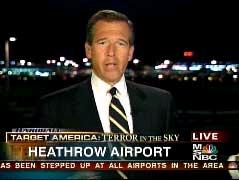 From Hardball with Chris Matthews:

Brian Williams [appearing from London’s Heathrow airport]: “And that, Chris, that last aspect, the willingness to take one’s own life — I always tell people there are guys on our team like that, too. They’re called Army Rangers and Navy Seals and the Special Forces folks and the first responders on 9/11 who went into those buildings knowing, by the way, they weren’t going to come out. So we have players like that on our team.”

To disillusioned asshats in the mainstream news, “One man’s terrorist will forever be another man’s freedom fighter.” …Sick!