Before it even began!
Hat Tip Tommy 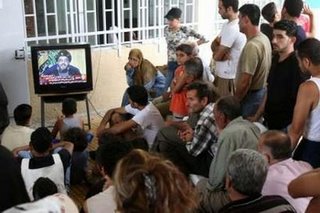 This news is from DEBKAfile:

Hamadi information minister, a Druze, said Sunday night that Nasrallah had broken his word to order Hizballah fighters south of the Litani to hand in their weapons to allow Lebanese army troops to be deployed there.

Lebanon front commander Maj-Gen Benny Gantz said Sunday night the IDF will honor the ceasefire but also defend its troops and Israeli civilians. DEBKAfile asks: Have they been told to hold their fire in line with Israel’s acceptance of the UN resolution 1701 now that the Lebanese government and Hizballah leader Hassan Nasrallah have backtracked?

DEBKAfile has learned that Tehran has meanwhile ordered Nasrallah to keep Israel engaged in combat for another 3 to 4. As a result of which he suddenly backed away from his pledges to France and the Siniora government Saturday to accept a ceasefire and a UNIFIL force in south Lebanon.

Nasrallah said he would wait a month to see how Israel’s retreat from the disputed Shabaa Farms was progressing.

At five minutes notice, the thunderstruck Lebanese ministers called off their meeting to discuss the deployment of their forces in the south and the disarming of Hizballah.

Sunday, an unprecedented number of rockets – 250 – were also fired into northern Israel by midday. DEBKAfile’s military sources say Hizballah is demonstrating that its ability to subject northern Israel to rocket barrages from S. Lebanon is unimpaired after a month of combat.

The BBC says as much in its report on the collapsed Lebanese cabinet meeting late on Sunday night… “Crucial Lebanese cabinet talks on disarming Hezbollah fighters in southern Lebanon under a UN-brokered ceasefire have been put off.”

Pajamas Media has an email from a source in the Lebanese government- very good.
Hat Tip Heather

Atlas has several great updates on the situation and had an exclusinve interview with Ambassador John Bolton, yesterday.

Vital Perspective has the Hezbollah Org-Chart.

Flopping Aces is all over the ceasefire story and thinks that Israel has called Hezbollah’s bluff.

Americans for Freedom is urging John McCain to compell testimony about the fraudulent pictures from Lebanon.