The liberal hawk is caught lying about the Commander of the Marine Corps. 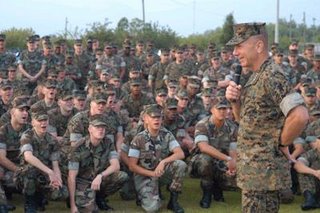 John Murtha is caught in an outright lie on where he got is information on the Haditha killings:

The head of the U.S. Marine Corps briefed Rep. John Murtha on the Haditha case after the vocal war critic publicly said Marines had killed innocent civilians in that Iraqi city, the Corps said on Thursday…

Murtha, a Pennsylvania Democrat, is being sued by one of the accused Marines for libel. He (Murtha) had told The Philadelphia Inquirer that Gen. Michael Hagee had given him the information on which he based his charge that Marines killed innocent civilians.

But a spokesman for the Marine Corps said Hagee briefed Murtha on May 24 about Haditha. Murtha had made comments on the case as early as May 17.

On May 17, for example, he said at a news conference, “Our troops overreacted because of the pressure on them and they killed innocent civilians in cold blood.”

A spokeswoman for Murtha was not immediately available.

Sweetness and Light has more on this disgusting story.
Wow! Patterico had questions about this back on May 27th!
American Thinker has questions for General Hagee.

This is how the Philadelphia Inquirordescribed Murtha’s source for his “cold blooded” claims:

Asked about this in the interview, Murtha said the information came from Gen. Michael Hagee, the commandant of the Marine Corps, in a one-on-one conversation the day before Hagee made a trip to Iraq. Hagee did not use the term “in cold blood,” he added.

He said the commandant did brief Murtha about the Haditha incident. But he said that was on May 24, a week after Murtha made his public comment. The next day, May 25, Hagee left for Iraq, he said.

Congressman John Murtha, D-Pa., a former Marine, was briefed on the Haditha investigation by Marine Corps Commandant Michael Hagee. Murtha said Sunday, “The reports I have from the highest level: No firing at all. No interaction. No military action at all in this particular incident. It was an explosive device, which killed a Marine. From then on, it was purely shooting people.”

Looking back at May 21, 2006, Flopping Aces and Expose the Left have the video of where Murtha claimed in a Wolf Blitzer interview that he knew the accusations were true because “TIME magazine has the pictures.”

And, Tree Hugging Sister sends this link to BradBlog’s coverage on Murtha’s rant back on May 19, 2006.

Democracy Project has more on the story.