The group gathered before their “weapons inspection” of the US military plane. 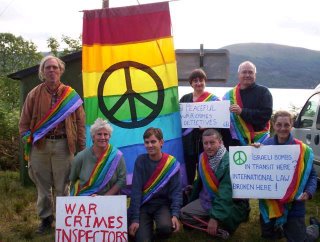 The “War Crimes Detectives” were then arrested after their inspection of the cargo. (Via Trident Ploughshares)

Seven “War Crimes Detectives” were arrested today in Scotland after they cut through a fence and boarded a US military plane:

British police have arrested seven anti-war activists after three of them boarded a US military transport plane at an airport in Scotland to check if it was carrying weapons to Israel, a peace group says.

Anti-nuclear campaign group Trident Ploughshares said its activists had cut through a perimeter fence at Prestwick Airport, near Glasgow, on Monday and boarded a US plane to search for evidence of arms shipments to Israel.

David Mackenzie, a spokesman for the group said “security was lax” at the airport, making it easy for Trident Ploughshares’ “war crimes detectives” to board the aircraft in the early hours.

The group said the airport has been used by chartered cargo planes to carry US-made bunker-busting bombs to Israel as the war in Lebanon continues.

“We want to underline the fact that by colluding with the US supplying Israel with bombs, Britain is colluding in war crimes,” he said, although no bombs were found on the plane and it was not known if it was bound for Israel. 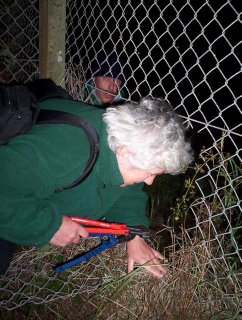 Cutting through the fence at Prestwick. (Trident Ploughshares)

The members involved in the protest were: Marcus Armstrong, 46, from Milton Keynes, Chris Bluemel, 35, from Southampton, and Angie Zelter, 55, from Norfolk, Sarah Lasenby, 68, from Oxford, Douglas Shaw, 56, and Jean Oliver, 48, both from Biggar, South Lanarkshire, and Matt Bury, 50, from Somerset.

The Far Left Christian Plowshares groups in the United States are also known for breaking into military installations.

In June, three Plowshare activists dressed as clowns, one a retired priest, the other two Vietnam veterans, broke into a North Dakota nuclear silo site, hung signs, “spilled their blood on the lid” and spray painted “Disarm” on the top of the silo.