If you’re a Leftist, and there’s a vote coming up…
And, there isn’t enough alcohol, or crack, or cash, or pork rinds available…

You can always by votes by threatening people with their food rations! 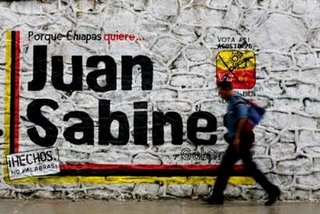 A man walks past a campaign announcement for Juan Sabines, the PRD (Revolutionary Democratic Party) candidate for Governor of the Southern Mexican state of Chiapas in the town of Tuxtla Gutierrez, Mexico August 19, 2006. Sunday’s local elections in Chiapas are the first to take place after Mexico’s July 2, still undecided, presidential race. Sabines is the preferred candidate of leftist Andres Manuel Lopez Obrador, who has led mass protests in Mexico City contesting the presidential election vote count. (REUTERS/Daniel LeClair)

Supporters for Leftist gubernatorial candidate Juan Sabines were arrested for buying votes from hurricane survivors or they wouldn’t receive a box of soup, milk, cooking oil and other basic food supplies from the city:

Mexican police said Saturday they had broken up a vote-buying scheme in Chiapas on the eve of state elections, which will be closely watched in a country already straining under the turmoil of a disputed presidential election last month.

Four supporters of Mexico’s leading leftist party were arrested Friday after authorities said they were caught trying to give away 36 tons of construction material to Hurricane Stan victims who promised to support the party’s gubernatorial candidate.

Aurora Guillen, a spokeswoman for the Democratic Revolution Party, or PRD, in Chiapas, said Saturday the party was aware of the arrests but was waiting for information from the prosecutor’s office before making a statement.

Chiapas resident Rosendo Paniagua said he was asked to hand over his voter registration card and told to vote for Juan Sabines, the former mayor of Tuxtla Gutierrez, or he wouldn’t receive a box of soup, milk, cooking oil and other basic food supplies from the city.

Paniagua said he and some 1,000 other senior citizens collected the foodstuffs.

Chiapas resident Rosendo Paniagua said he was asked to hand over his voter registration card and told to vote for Juan Sabines, the former mayor of Tuxtla Gutierrez, or he wouldn’t receive a box of soup, milk, cooking oil and other basic food supplies from the city.

There is concern of violence after the national Leftist leader Lopez Obrador visited the state:

But Mr Rojas says Mr López Obrador’s growing involvement in the state election is polarising an already fractured population, and expresses concern that things could get out of hand.

“This election process could end in violence,” he told the FT in an interview. “If the vote is close López Obrador will apply the same tactics here as in Mexico City, and that would strain the tense relationship between the PRI and the PRD.”

The Leftist leader Obrador who has held protests for a month after his close loss to the more conservative Caldaron, is now threatening the country with violence.