From the AP Monday: 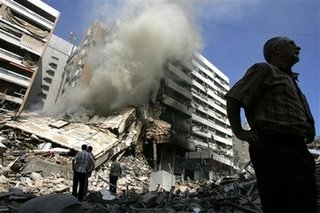 Lebanese men survey the damage to apartment blocks destroyed in Israeli bombardment as they return to see their homes in the southern suburbs of Beirut, Monday, Aug. 14, 2006. Hours after a U.N.-brokered ceasefire took hold Monday, thousands of Shiite refugees returned to disaster-stricken neighborhoods south of Beirut to check on their homes. (AP Photo/Kevin Frayer)

From the AFP Monday: 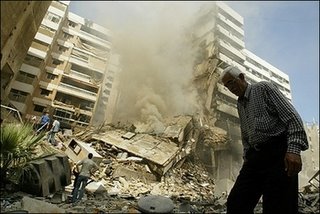 Jews have rallied to collect donations for Israel, although some in the community argue that funds should also be sent to war-ravaged Lebanon for aid its reconstruction.(AFP/Ramzi Haidar) 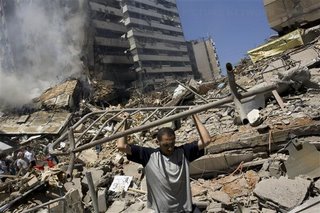 After the UN brokered cease-fire went into effect, thousands of Lebanese including residents from the Haret Harek neighborhood of Beirut, returned to find what remained of their homes and businesses, the vast majority of this once bustling suburb reduced to rubble, on Monday, Aug. 14, 2006. (Tanya Habjouqa) 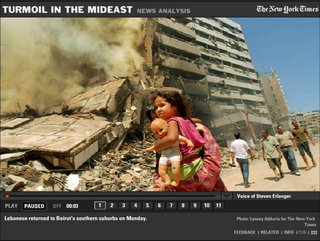 Staged?… Or, just a little girl and her doll looking for a place to play?

Russel Mitchell has thoughts on this one. 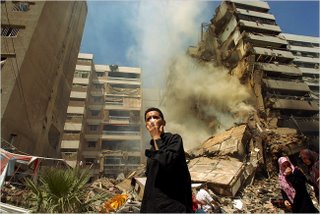