British Muslim organizations will have a hard time explaining that young middle class Muslim parents are exploding their 6-month-old babies as a result of Tony Blair’s foreign policy. 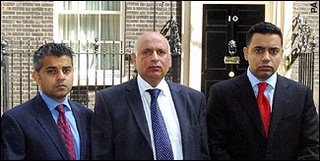 MPs Sadiq Khan, Mohammed Sarwar and Shahid Malik wrote the Blair government this week after the arrests of the 24 terror suspects blaming the prime minister’s foreign policy for Muslim extremism.

How can anyone possibly defend this?
Young Muslim Parents were planning on killing themselves and their 6 month old baby in one of the airline bombing attacks, it was reported today:

Scotland Yard police are questioning a husband and wife who allegedly planned to hide a liquid bomb in their baby’s bottle to bring down an airliner.

“The phenomena of suicide bombings as a new way of taking part in terror attacks is in itself concerning, but to think or imagine that anybody would use an innocent child to join them is even more disconcerting,” he said on Channel 9.

…Scotland Yard police are quizzing Abdula Ahmed Ali, 25, and his 23-year-old wife Cossor over suspicions they were to use their baby’s bottle to hide a liquid bomb.

Cossor took her baby with her to the police station during last week’s raids but her son is now being cared for by grandparents.

“We didn’t understand what the hurry was and why he needed to go,” Mr Ahmed said.

It was reported today that at least one terrorist attack was spoiled six years ago long before the War in Iraq or 9-11.

It will be hard for the Muslim Parliamentarians to claim that British foreign policy in Iraq and Lebanon is making Muslims explode their babies!

Glib Fortuna at STACLU looks at “Why they hate us.”
AllahPundit thinks there may be some backlash against Muslims in Britain.