…He says part of the blame for the world’s higher temperatures rests on gas guzzling vehicles. Obama says consumers can make the difference by switching to higher mileage hybrids.

Today the Senator said, “It would save more energy, do more for the environment and create better world security than all the drilling we could do in Alaska.”

“After the meeting… Obama left in a GMC Envoy after admitting to favoring SUV’s himself,” claimed local News Channel 6.

Tommy Vietor, Senator Obama’s press secretary, explained: “The vehicle senator Obama travels in while in illinois is a Flexible Fuel Vehicle (FFV), which can run on e85, a blended fuel made of 85 percent ethanol.

“So he in fact was practicing what he preached at the town hall meeting in Metropolis yesterday when he said we must drive fewer gas-guzzling vehicles.” 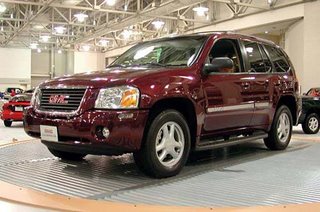 But, there’s a problem with this story…

Illinois Review notes that, according to the National Ethanol Vehicle Coalition, the GMC Envoy is not E85 ready.
It appears that Obama’s claim is no more real than Chitty Chitty Bang Bang.