Rocky, from St. Bernard Parish in Louisianna, lost everything in Hurricane Katrina. He drove all the way to the White House to speak with the president personally. 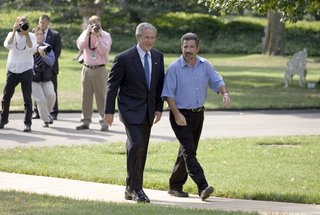 President George W. Bush and Rockey Vaccarella of New Orleans walk to the Oval Office after delivering a joint statement to the press on the South Lawn Wednesday, Aug. 23, 2006. Vaccarella, who lost his home in the wake of Hurricane Katrina, drove to Washington, D.C., with the hopes of speaking directly with President Bush. (White House photo by Paul Morse)

THE PRESIDENT: It’s an amazing country, isn’t it, where —

MR. VACCARELLA: It is. You know, it’s really amazing when a small man like me from St. Bernard Parish can meet the President of the United States. The President is a people person. I knew that from the beginning. I was confident that I could meet President Bush.

And my mission was very simple. I wanted to thank President Bush for the millions of FEMA trailers that were brought down there. They gave roofs over people’s head. People had the chance to have baths, air condition. We have TV, we have toiletry, we have things that are necessities that we can live upon.

But now, I wanted to remind the President that the job’s not done, and he knows that. And I just don’t want the government and President Bush to forget about us. And I just wish the President could have another term in Washington.

THE PRESIDENT: Wait a minute. (Laughter.)

Mr. President, it’s been my pleasure.