“It’s harassment. It’s crap. This is private property. What a waste of everybody’s time.”

…Until the Dick Cheney look alike in sandals led the insurgency against their invasion! 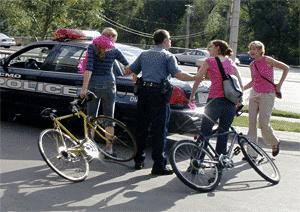 The protest did not go off so well for the Code Pink activists in Kansas City. Not only did the customers get irate and force the women to flee, but sadly, “the big oil protesters were hauled to the tank.”

The Code Pink website reported that the “gas station seizures” protest on July 21 was a great success explaining, “The speed and mobility of bicycles allowed the activists to completely shut-down each station for a brief time and then move on to the next one.”

However, Alan Scherstuhl from The Pitch out of Kansas City, Missouri, has a different view in one of the most entertaining stories of the day:
(Warning: Profanity)

Attempting to “draw attention to the fact that our political and economic systems promote unsustainable consumption of resources and perpetual war,” the Code Pink crew was planning to bike to and “occupy” area gas stations.

At 5 in the afternoon. At the end of the hottest week of the year so far.

On July 21, the Strip watched as a dozen demonstrators met in a parking lot at Westport Road and Southwest Trafficway. “This action’s an experiment,” Lindsey Walker told the Strip before handing out pink tops to anyone not dressed for the event. “We’re not after agitation or confrontation. This is a distraction from that normal flow, that repetition of getting gas and not thinking about the consequences.”

The operation: Bike up to pumps, wrap a pink trash bag around the handle and prevent customers from filling up — for a minute or two. Sarah Finken would lead chants with her megaphone while others would wave banners. Tiffany Coleman laid out the ground rules. “Be nice to people. Block the pump with your bike but do not get confrontational. If they [customers] get anything more than verbal with you, leave.”

The first target was the QuikTrip at Westport Road and Mercier, already a cauldron of circling cars and surly customers.

Seven bicycles rolled to the pumps at 5:16, inciting a couple of anti-war honks. Out came the trash bags. To stunned motorists, the activists said things such as “no gas today,” “keep driving” and “we’re taking over.”

With a feathery boa wrapped around her Peaches T-shirt, Finken commandeered the easternmost pumps. She kicked off the chants with “money for health care!”

“Stop the war!” called the rest of the Code Pinkers.

Half the QuikTrip customers: “F-ck you!”

At Finken’s pump, a Dick Cheney look-alike in shorts, sandals and an apoplectic rage, leapt from his red Dodge van and pushed her aside.

“Move the fuck out of my way!” He dragged her bike from the pump.

Cheney: “Don’t fucking do that!”

Finken’s megaphone squawked with feedback. Cheney made a move for it, grabbing Finken’s wrist, but then backed off a bit, yelling, “We’ll see about a fucking war! You’re on private property, you asshole!”

Finken let him pump his gas but continued to chant.

Cheney finally lost it completely when he spotted Code Pinker Andrew Badgerow snapping away with a digital camera. Cheney upended a bike and seized Badgerow’s camera, which he threw to the pavement, shattering it.

By this time, Coleman was calling for an evacuation.

By the way, Code Pink is supporting this action of seizing private property.

There’s a good comment on the Leftist blog, BradSpangler about the “gas haul.”