Supporters of the Iranian Regime prevent Jews from demonstrating today. 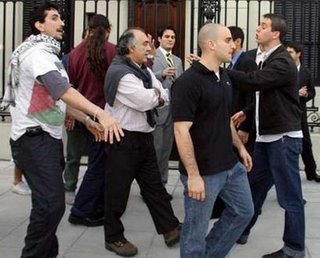 Members of the Iranian community (L and 2nd L, in white) argue with a member of the Jewish community (far R) who was planning a protest against Iran, near the Iranian embassy in Buenos Aires August 23, 2006. (REUTERS/Enrique Marcarian)

A group of radical leftist supporters of the Iranian regime prevented Jewish protesters from holding a demonstration at the Iranian embassy in Buenos Aires today:

Left-wing activists in Argentina prevented an anti-Iran demonstration.
Argentine Jewish groups organized a demonstration Wednesday in front of the Iranian Embassy in Buenos Aires to protest Iran’s support for Hezbollah.

But some 50 members of the group Quebracho stopped traffic and blocked the street so the Jewish demonstration couldn’t proceed.

“Public opinion can understand, from this event, who is playing with violence,” said Silvio Rossjansky, president of the Argentine Zionist Organization. 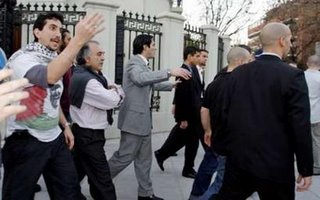 A member of the Iranian community (L) argues with members of the Jewish community (R) who had planned a protest against Iran, near the Iranian embassy in Buenos Aires August 23, 2006. (REUTERS/Enrique Marcarian)

The leftist group, Quebracho, is known for its violence and caused mass riots in 2004 when 4 leftist political activists went on trial.