Iran Warns US of "Destructive Punch" & Israel of Annihilation

The Iranian Regime still denies that it is supporting Hezbollah,
…which still does not explain those 1,300 pound Iranian missiles that Hezbollah has been firing into Israel. 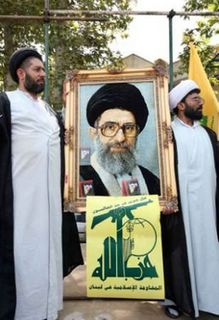 Iranian clerics hold a picture of Iranian Supreme Leader Ayatollah Ali Khamenei and a logo of the Lebanese Hizbollah during an anti-Israel demonstration in Tehran, August 3, 2006. (REUTERS/Raheb Homavandi)

Mahmoud Ahmadinejad said the long term solution to the current crisis is the annihilation of Israel but a cease fire will do for the short term:

Mahmoud Ahmadinejad has said the solution to end the conflict in Lebanon was the “elimination of the Zionist regime.”

Attending a summit of Muslim nations in Malaysia, Iran’s president said: “The real cure for the conflict is the elimination of the Zionist regime, but there should be an immediate ceasefire first.”

With regard to the idea of deploying an international peacekeeping force in southern Lebanon, he said: “The peace and security of Lebanon should be settled by the Lebanese people and government. The presence of foreign troops is unacceptable, unless they are under UN command.

Ahmadinejad, whose country is at odds with the West over its nuclear programme, took a swipe at Britain and its arch-foe the United States.

“The losses inflicted on Lebanon should be paid by the US and Britain which are supporters of the Zionist regime.”

Yesterday, the Supreme Iranian Leader Ayatollah Ali Khamenei vowed that the US will receive a “destructive punch” for its support of Israel.

Andy Stewart forwarded the transcript from Ahadinejad’s “Death to America” speech as posted at MEMRI TV.

Also on Wednesday… Iranian cleric and head of Iran’s influential Guardians Council, Ayatollah Ahmad Jannati, urged Muslim nations to arm Hizballah against Israel even though Iran has claimed several times that they are not supplying Hezbollah with weapons.