Masked Indonesian bandits gave Israel 48 hours or they would blow themselves up for Lebanon. It’s amazing how Reuters, AP, AFP are able to get such great shots of the terrorists(?) 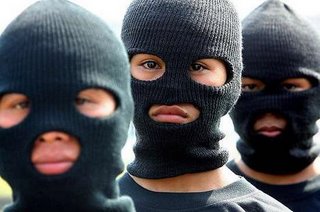 An Indonesian Muslim group has warned Israel and its supporters that the suicide bombings will start up in 48 hours:

After more than 100 balaclava-clad “jihadis” demonstrated their martial arts skills in Pontianak, on the Indonesian island of Borneo, yesterday, the group’s leader said he was preparing to launch bombing attacks against Israeli interests in several countries, including Australia, Britain and the US.

“If, after the 48-hour deadline, the aggressions continue, we can’t be held responsible if there are suicide bombings in countries that support the aggressions of the Israeli military, if it is America, Australia or other countries,” Asian Muslim Youth Movement (AMYM) leader Suaib Didu said. 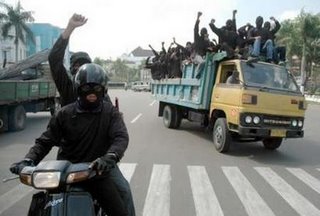 Members of the Jakarta-based ASEAN Muslim Youth Movement (AMYM) raise their hands as they arrive for a show of force in Pontianak, West Kalimantan province of Indonesia, August 5, 2006. More than 200 Islamic militants from Southeast Asia will be sent on missions to attack Israel’s interests and countries that support the Jewish state, their leader said on Friday. (REUTERS/Stringer)

Reuters, up close and personal… 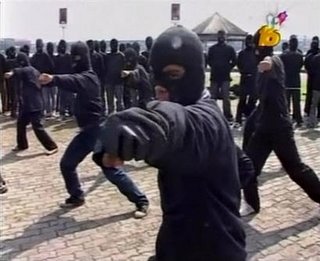 The 200 or so Indonesians added their names to a register for Islamic holy war, or jihad, against Israel.

Reuters also seems to be doctoring photos from Beirut these days as seen at Little Green Footballs and HotAir.

Michelle Malkin has much more on the fake smoke story from Reuters.
Dan Riehl has more on Reuter’s smokescreen.