The BBC was not sure whether the protest was coordinated or spontaneous…
Never mind all of the Nasrallah signs! 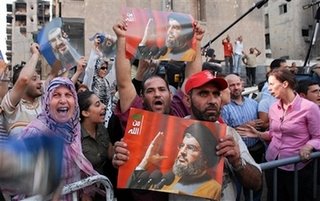 Kofi Annan made a stop in Beirut today and asked Israel to lift its blockade on Lebanon:

Speaking after talks in Beirut, he said he was working for an immediate end to the sea and air blockade and the troops should be handed over to the Red Cross.

Mr Annan is on a regional tour to try to prop up the two-week-old ceasefire.

This family just happened to be walking with their Nasrallah posters when Kofi showed up. 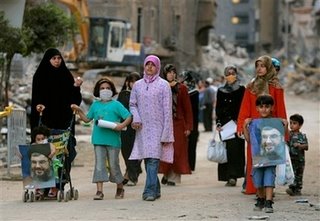 Lebanese children hold pictures of Hezbollah leader Sheik Hassan Nasrallah given to them to hold by adults before U.N. Secretary-General Kofi Annan visited the area in the southern suburbs of Beirut, which was repeatedly attacked by Israeli forces during the 34-day Israeli-Hezbollah conflict, Monday, Aug. 28, 2006. (AP) 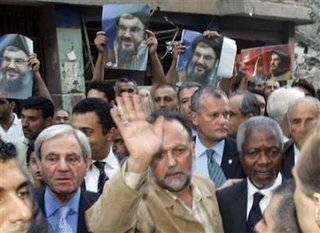 Counterterrorism Blog describes the show including this… “The Lebanese Army officers and Hezbollah were seen smiling at each other and coordinating the staged demonstration.”

Charles Johnson has much more on Kofi’s visit.

Jim Hoft
Jim Hoft is the founder and editor of The Gateway Pundit, one of the top conservative news outlets in America. Jim was awarded the Reed Irvine Accuracy in Media Award in 2013 and is the proud recipient of the Breitbart Award for Excellence in Online Journalism from the Americans for Prosperity Foundation in May 2016.
BREAKING: Burisma Investigation to be Released within 24 Hours -- FINDS BIDEN FAMILY GUILTY LIKELY CRIMINAL ACTIONS (VIDEO)
Let's Make Her Famous! Violent, Foul-Mouthed Leftist Caught on Video Ripping Down Trump Sign in Castle Rock, Colorado
Karma's a Bitch -- Angry Woman Driver Screaming at Trump Supporters and Flipping the Bird Rear-Ends Car in Front of Police (VIDEO)
Obamagate the Movie Is Being Censored by Twitter -- China-Like Censorship in US During an Election -- Where Is the GOP?
Tim Tebow and His Wife Demi-Leigh Join Bill Barr and Ivanka Trump to Battle Scourge of Human Trafficking
See more...