Holy Cow! The nutjobs are massing!

And, Holy Cow… for real! 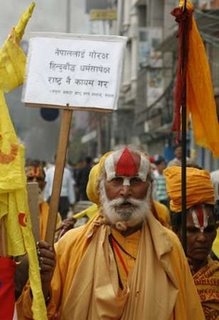 A Hindu carries a placard that reads ‘Declare Nepal a Hindu state with the holy cow protecting the nation again’ during a protest in the Nepali capital Kathmandu August 3, 2006. Hindus took out a protest rally by blockading roads with burning tyres and shouting slogans against parliamentarians. (REUTERS/Gopal Chitrakar)

Holy Cow! Lie down with the emotionally unstable, wake up with the crazies.