Well, is this a surprise to anyone? 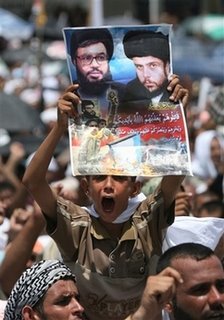 An Iraqi boy holds a portrait of Shiite cleric Muqtada al-Sadr and Helzbollah’s Sheik Hassan Nasrallah with thousands of Iraqi Shiites gathering in a mass demonstration against Israel’s bombing of Lebanon, Friday, Aug. 4, 2006, in the Sadr City area of Baghdad, Iraq. Over 200,000 Shiites filled the streets of the Shiite dominated Sadr City slum to attend a rally in support of Lebanon after Friday prayers. (AP Photo/Hadi Mizban)

For the AP to say this was a rally in support of Lebanon is utter crap! This is the opportunist Al Sadr rallying in support of the Iranian front man Nasrallah and his terrorist thugs of Hezbollah.

But, too bad for the Hellish Al Sadr… The turnout was way below expectations, even considering buses were sent as far south as Basra to gather the faithful.
Omar at Iraq the Model reports:

…Instead of the million figure that Sadr was aspiring to see in Baghdad and out of supposedly 2 million Shia residents of Sadr City only 100 000 showed up and that’s only after Sadr summoned demonstrators from the southern provinces and sent busses to fetch them and let’s not forget that the demonstration took place in Sadr’s own stronghold where it’s supposed to take no effort from supporters to show up and march; technically they were asked to march in their own front yard.