FOX News has the emotional footage of their release in Gaza,
VIDEO HERE.

Now, here’s a picture…
Centanni & Wiig with “our hero” Prime Minister Ismail Haniyeh who knew where the captors were holding the two journalists. 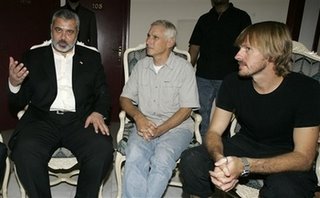 Fox News journalists Olaf Wiig, 36, from New Zealand, right, and Steve Centann, center, are seen with Palestinian Prime Minister Ismail Haniyeh, from Hamas, after their release at an hotel in the Gaza City beach front Sunday Aug. 27, 2006. The two were released Sunday, nearly two weeks after being seized by militants in Gaza.(AP Photo/Hatem Moussa)

Centanni says “the Palestinian people are very beautiful and kindhearted” in his interview after his release:

Militants freed two Fox News journalists on Sunday, ending a nearly two week hostage drama. One of the former captives said they were sometimes held face down in a dark garage, tied up in painful positions and forced at gunpoint to make videos and say they had converted to Islam.

Correspondent Steve Centanni, 60, of Washington, D.C., and cameraman Olaf Wiig, 36, of New Zealand, were dropped off at Gaza City’s Beach Hotel by Palestinian security officials. A tearful Centanni briefly embraced a Palestinian journalist in the lobby, then rushed upstairs with Wiig behind him.

The pair, who appeared to be in good health, then met with Palestinian officials, including Prime Minister Ismail Haniyeh. The three men sat in a circle of chairs at the hotel, before the journalists held a news conference, then left for Israel.

The journalists said they hoped their ordeal would not prevent others from covering the Palestinians.

“I want to thank everybody. I am happy to be here. I hope that this never scares a single journalist away from coming to Gaza to cover the story because the Palestinian people are very beautiful and kind-hearted,” Centanni told reporters. “The world needs to know more about them. Don’t be discouraged.”

I’d say the same thing ’til I got the hell out of there!

AllahPundit is all over this good news story.
Michelle Malkin also has a roundup.

Jules Crittenden shares his thoughts at the Boston Herald.