Has the left leaning blogosphere ever done anything that helped promote the Democratic Party?

…That is, besides driving the party further Left and running the few remaining moderates out of the party!

Yesterday, the nutroots at the Left’s leading blog, Daily Kos, outdid themselves as Charles Johnson discovered. 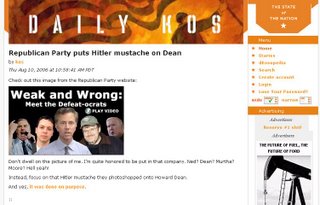 But, as Charles Johnson noted… It’s a lie!…
…Kos put a Hitler mustache on Howard Dean himself!
How pathetically dishonest!

Here is the original from the GOP website– It’s a great video by the way!

Too much!… The poor Leftists just don’t understand that it isn’t necessary for the GOP to resort to “fauxtography”…

…As long as there is Google, the GOP will do just fine.